← more from
New Focus Recordings
Get fresh music recommendations delivered to your inbox every Friday.
We've updated our Terms of Use. You can review the changes here. 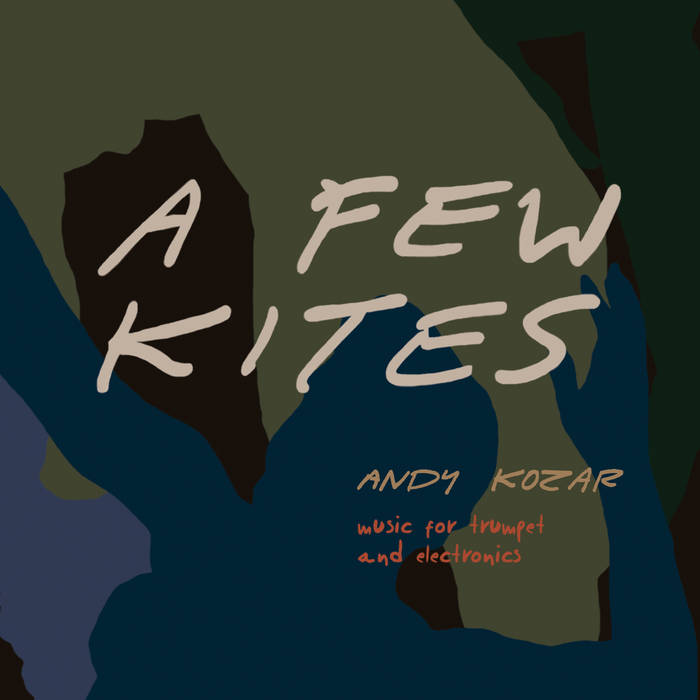 American trumpet soloist Andy Kozar releases “A Few Kites,” his premiere solo record, featuring extraordinary new works for trumpet and electronics from many of the country's leading composers. Best known for being one fourth of the 'inventive' (New York Times) and 'cultivated' (The New Yorker) group loadbang, Andy is committed to commissioning new works for trumpet and electronics as part of a larger project to grow the repertoire for his instrument. The composers on this disc, Paula Matthusen, Ken Ueno, Scott Worthington, Quinn Collins, Tyler Harrison, Davíð Brynjar Franzson, Eve Belgarian, Heather Stebbins, and fellow loadbanger Jeffrey Gavett, all offer different interpretations of what a trumpet and electronics piece should be in their unique languages. The combination of Andy’s performative dexterity and innate sensitivity to phrase delivers performances that hover above stale musical ground while still being tethered to a new music tradition.


The opening work of this record, Quinn Collins' Blister, is a technical tour-de-force, highlighting Andy Kozar's virtuosic abilities on the instrument. The electronics include a juxtaposition of found audio objects (bending of metal sheets, breaking of glass, and the dragging of chains) and synthesized material. Both the trumpet and synthesized electronic material primarily use eight chords, which are approached melodically either intuitively or by employing algorithms using Markov chains in a computer application titled Grace by Heinrich Taube.

The inspiration for Paula Matthusen's on the imagined relations of night sounds (and silent darkness) lies in the ever-changing soundscapes of New York City. The source material is drawn from field recordings conducted overnight at the Great Lawn in New York City’s Central Park, beginning at the start of summer in June, and ending in early September. Interested in the present soundscape of the city that never sleeps, the work invites the audience to listen in on the various states of sonic activity as they transition gradually from sunset to sunrise, as well as early to late summer.

In Ken Ueno's Quentin, the first, short, movement is played on a part of the trumpet that is not normally played separately from the rest of the instrument: the first valve slide. In fact, it is a first valve slide from a Bb trumpet (a deconstruction of a trumpet), whereas the rest of the piece is played on a C trumpet, “hacked” with a 7-ft tube inserted into the first valve. The timbral distortion effected by these ostensible preparations and the microtonal focus of the piece are ways in which the composer imagines a kind of primitivist music of the future. Or, put another way, music which at once can be evocative of some faint memory of a folk music of an esoteric tribe of the ancient past as much as a experimental music of a virtuosic music cult in an unspecific distance into the future.

On the title track, A Few Kites by Scott Worthington, Andy is joined by violinist Leah Asher. Placing brief musical fragments over a wind-like, undulating drone, the violin incessantly repeats one fragmented motive; each time slightly altering its inflection while the use of the moving plunger mute on the trumpet adds another layer of fluctuation to the overall texture. These aspects of the piece, in addition to the drone, convey to the listener something hazy and muted, as though heard from a great distance — like seeing a few kites floating far away against the vast, empty sky.

Tyler Harrison's Flutter is one of the earliest pieces that Andy Kozar commissioned for trumpet and electronics. The five-note motive at the beginning of the work is of emotional and symbolic significance to the composer and regularly appears in many of his works. In Flutter, the hyper-processed flutter-tonguing, multiphonics, and percussive effects in the trumpet produce the sound and affect of a digital primal scream, or a desperate pleading.

Moving Target is a study of intonation on the trumpet, written by composer and vocalist Jeffrey Gavett. Based off of the natural tuning tendencies of each possible overtone series on Andy’s trumpet, harmonies were built around these pitches. The trumpet and electronics traverse a microtonal pitch space ranging from the simplest sustained intervals to the constant flux of glissandi, exploring the ways in which changes in harmonic context require subtle shifts in tuning.

Still Life, the second work on the album by Scott Worthington, places the trumpet within a slowly evolving drone. The trumpet's repetitive figure also slowly evolves, echoing itself with minor permutations throughout while Heather Stebbins' Tracer emulates that strange consciousness you have during the last bit of a dream, and the feeling of clarity and understanding that is shattered when you finally awaken. You try in vain to remember the events of the dream, but all you can make out is an ambiguous essence.

The title of Eve Beglarian's Osculati Fourniture comes from a mysterious query in a journal entry written by the composer's mother, Joyce Heeney Beglarian, on 22 May 1981, while en route to Florence from Pisa. Though it's remained unknown why these two words came into her mind while riding along the autostrada, but it seems likely that the whole business has some obscure significance. The music is a response to the gushe Zirkesh-e Salmak in the dastgah of Shur, part of the repertoire of Persian classical music.

A native of Pittsburgh, Andy Kozar is a New York City and Boston based trumpeter, improviser, composer and educator that has been called a 'star soloist' by TimeOutNY. He is a founding member of loadbang and the Byrne:KozarDuo, and has performed with Bang on a Can, Ensemble Signal, Boston Modern Orchestra Project, and the St. Petersburg Ballet. Andy is a Yamaha Performing Artist. ... more

Bandcamp Daily  your guide to the world of Bandcamp